yogi mama, teacher and founder of growing with yoga 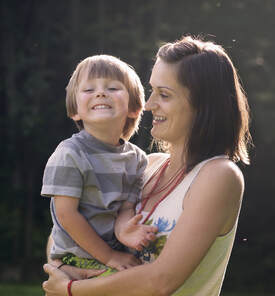 Kasia is an educator, mother and entrepreneur. She is an “idea-preneur”…meaning she works hard to put her ideas into action! She is dedicated to educating children and is forever learning to expand her own views of best-practice, following a child-led, developmentally appropriate practice model with the children in her care. She believes that every child has a right to high-quality education and care. Along with being the owner of Growing With Yoga for the past ten years, she is also the Co-Director and Lead Preschool Teacher of a nature-inspired preschool in New Hampshire. The school follows an anti-bias approach to educating the young hearts and minds of children, while offering plenty of time to explore in nature.  Kasia has led professional development workshops for educators in NH, and VT (Mindfulness In The Classroom, and Teaching Mindfulness in Nature-Based Programs), as well as through In Bloom Nature-Based Learning Conferences run by Antioch University.

​Kasia attended Northeastern University and graduated with a Bachelor’s degree in Psychology. She received her teaching certificate in Early Childhood Education in 2010 while pregnant with her son, around the same time she became a Certified Children’s Yoga Teacher through ChildLight Yoga (now ChildLight Education Company). Kasia grew up visiting two east-coast Tibetan Buddhist Centers with her family (Milarepa Center in Vermont and Kurukulla Center in Massachusetts), and continued her studies in Tibetan Buddhism and mindfulness during and after college. She also co-led programs for children and families at these Buddhist Centers. As a mother, Kasia believes that play, connection and trust go a long way into cultivating a meaningful relationship with her son. Kasia and her son enjoy an active lifestyle: whether they're swimming in the lake, playing sports, chasing after their rescue pup named Poppy (a former street-dog from Nepal), or just hanging out eating ice cream, they are always up for a fun adventure.
contact Kasia